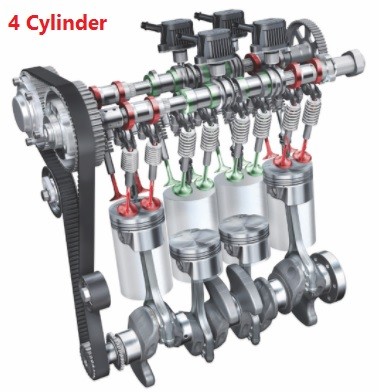 A Cylinder is the Central Part of Engine. Its a Place where Piston which moves up and down and delivers Power to Crankshaft so as to drive in the wheels of the car.

To make it simpler and on broad term - Car Engine Performance is directly Proportional to Number of Cylinders in it. The more the number of Cylinders - higher the Power Output would happen to a Vehicle - considering Compression and other parameters be constant.

Benefit of 4 Cylinder over 3 Cylinder Engine

» Engine Noise turns much higher on High Speed in 3 Cylinder Engine. Take case - The Piston have to work harder to rotate Crankshaft and on higher speed - 3 Cylinder vis a vis 4 Cylinder - to achieve Speed - will even have faster rotating pistons - which may turn noisier at times

However - if a Diesel Car is in a 3 Cylinder Engine - then expect its Performance at Par (to a 4 Cylinder Petrol) - due to the fact of high Torque. All Diesel Cars Mentioned - Grand Diesel, Xcent Diesel, TUV300 - has excellent low end torque and performs well for daily commute with top notch ease.

Advantage of 3 Cylinder over 4 Cylinder

» Engine is like Heart of the car and is the Major Costing Component. Removing 1 Cylinder will help Manufacturer keeping the Price lower

» Mileage would Tend to Improve been Engine would be Light in Weight, Engine gets cooled off easier and relative lesser frictional loss

Rest - all other Cars comes in 4 Cylinder Engine

There is very little room for 2 Cylinder Engine Cars. Maruti Celerio Diesel is already been discontinued despite been the smallest, Lightest and most fuel efficient Diesel Engine in the World for a Passenger Car.

Been Engine Noise, Vibration Levels with Poor Pickup has almost no scope in this Modern Age Automotive Market